A much-needed rest day today – and we were lucky to have pitched up for two nights in a peaceful campsite near the village of West Ashling on the outskirts of Chichester. Phil managed to totally chill as he went to have a sports massage at a local therapy centre. Fortunately it was only a short ride there as he was wearing normal everyday shorts, not the super duper padded variety he relies on during longer rides.

I was inspired by the flat landscape and so I went for a ride in the afternoon around the nearby extensive area known as Chichester harbour, full of waterways and eerie marshes. I managed to clock up around 20 miles in the saddle, so in the end it was not much of a rest day for me. The reason for the longer ride was that I happened upon a small ferry across an inlet and decided to jump on board without really knowing where I was going. 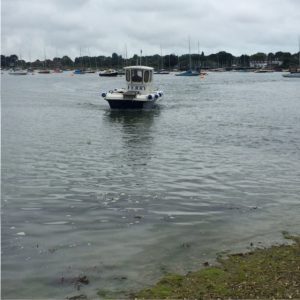 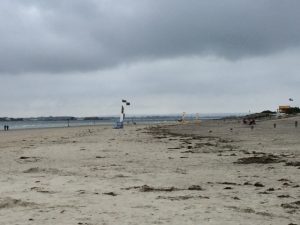 and then to the pebbly beach at East Wittering. Here I staged a photo in the spirit of Phil’s during his training – a bike propped up amid scenery. Note the Bath to Rome stickers on my bike! 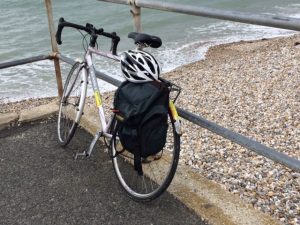 Anyway I digress. This trip is about Phil’s riding exploits not mine so it will be mainly back to motorhome driving duties for me tomorrow.