Quite a statement about our ride today over the Gotthard pass from Andermatt to Airolo! Especially when the writer today is the old guy on the trip – Phil’s dad.
But it was truly awesome. First of all a five mile slog up the mountain pass. Fortunately not super steep but still hard work, especially when the wind was against us in some more open parts of the valley.

After a while Phil the gazelle opened up a massive lead over his old man who opted near the top to take the old road, cobbles and all. It was off the main road but a bit bone-shuddering. Eventually I reached the top – Phil had already been there 15 minutes and taken a photo of his bike proudly sitting at the summit. 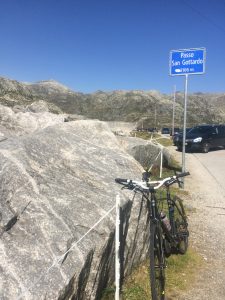 But soon the puffing and panting yours truly also made it into shot.

The hard work over we could really enjoy the rest of the ride.
And the views down the valley to our destination certainly lived up to expectation.

Dramatic views everywhere including the old cobbled road which snaked its way down alarmingly.

We took the modern road down which was reasonably quiet and safeish — though toward the bottom we found ourselves on the old road and had to negotiate the cobbles downhill. This old road is in excellent condition and is kept like this to celebrate Swiss heritage. But it meant for some stretches we had to go quite slowly with the brakes jammed on.
We had already descended a long way to Airolo – but the treats kept coming. Now we were going down a steep river valley with a busy motorway clinging precariously to the valley side.

After nearly 20 miles of this we finally arrived at our wonderful destination – Tim had already found us a quiet corner.

So glad to be away from the Andermatt campsite where our campervan was parked in the carpark for the winter ski lift – and had horrible gravel to step over.

Phil has been a star – four consecutive 1,000 metre climbs in just four days. Tim and I have done two each but Phil takes the polka-dot jersey (spot the Tour de France reference) for being by far the best mountain road climber in the Bowers family. But I can console myself by being able to ride with him on this epic mountain leg.